BlueHost vs DreamHost: Who Is The Winner? 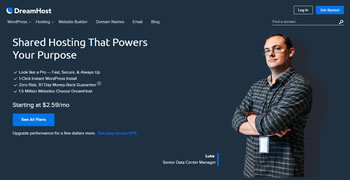 BlueHost has often landed on my bias list since I am not overly fond of EIG-owned companies but there is no debating the fact that it has been around for a long time. In fact, both BlueHost and Dreamhost are industry veterans having survived in this competitive environment for close to two decades.

Yet at the end of the day these two hosts are more closely matched than likely many will realise. Read on to discover the highlights of a head to head comparison.

One thing that is clear with these two hosts is that BlueHost has somehow retained a strong lead in terms of performance. Time to First Byte (TTFB) is one of the key metrics which we look out for in a web host since that is a focus point that Google pays attention to as well.

Coming in strong with a TTFB of under 500ms, BlueHost can easily keep up with the best in the business – Dreamhost not excepted.

Yet all is not lost with Dreamhost since there are several things about this host that are interesting and certainly out of the norm. Take for example their guarantee of 100% uptime. This is something that is unprecedented in the industry.

Most web hosting service providers are very cautious about their uptime guarantees – after all, violating their Service Level Agreement (SLA) means that they will often have to compensate their users. As such, it is normal to see web hosts offer uptime assurances of between 99% to even 99.999%. Dreamhost as far as I know is the only one who has dared step forward with a 100% uptime assurance.

If you combine this with their 97-day full refund trial period, I would venture that they are either foolhardy or steadfastly confident in their ability to stick to it. Either way, the customer wins!

Both Are Recommended by WordPress.org

Both hosts have the distinct feather-in-the-cap of being recommended by WordPress.org. This rare honour is only extended to three web hosts, out of literally hundreds of thousands that litter the web hosting landscape today.

That should tell you that you won’t really make a major misstep by going either way. However, between them, BlueHost is one of the more prominent names recognized and has gained an impressive reputation among site owners and bloggers.

In a survey carried out by us among 200 respondents, BlueHost came up number three on the list – not a small feat at all!

Truth be told, both hosts have gotten extremely positive reviews from their users and are worth a look at.

Neck and Neck in the Price War

Comparing plans side by side, BlueHost plans start at an impressive $2.95 per month on its lowest tier (provided you sign up for a 36-month plan). Against that is Dreamhost which comes with  slightly lower price at $2.59 per month.

Unfortunately, as is the norm, once you get past the promotional sign-up period, plan prices go up significantly.

It is not often that we see two web hosts that compete so closely on so many levels. In terms of reputation, features, performance and even pricing, BlueHost and Dreamhost are both closely matched.

In fact, given their similarities they are even competing for the same market share and are uniquely suitable for both smaller, personal sites as well as being excellent choices for small businesses. Either way, if you’re considering between these two hosts, I feel that you won’t really go far wrong either way.

Personally though, I would feel very much drawn by the 100% uptime and 97-day money back guarantee that Dreamhost offers – but that’s just me.