Surfshark is a relative newcomer to the Virtual Private Network (VPN) scene and appeared with a bang. In just around a year they were able to field a large network of over 800 servers in around 50 countries. The first thing that made me perk up was the news that it was based in the British Virgin Islands (BVI).

The BVI are a British Overseas Territory as we know but has no known data retention laws to speak of and in has its own separate judiciary system. This makes it an ideal base for VPN companies since that is part of their core business – anonymity.

With that in mind I signed up for a two-year plan and jumped right in, running it through the works. Will Surfshark stand up to scrutiny in its service? Let’s find out. 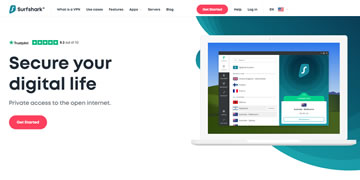 Surfshark checks of many of the right boxes that make up a good VPN – Speed, Security, and anonymity. It is now on the top of my favourites list.

As I mentioned earlier, the first thing that made me take note of Surfshark was the BVI-base it works from. That bodes very well for the no-logging policy that the company has. It claims to only store limited amounts of user data for specific purposes.

On a side note, Surfshark also lays claim to having gone through an independent audit, but I have to stress that the audit was done only on their Google Chrome extension.

As with most VPNs, Surfshark comes with a choice of protocols you can choose from. The choices here a little more limited than usual though. You only have access to IKEv2, OpenVPN (TCP or UDP) and a little-known protocol called Shadowsocks.

The inclusion of Shadowsocks was a little surprising at first since its developer was asked to stop working on the code and remove it from GitHub where it was shared. The protocol remains alive though and now has its own site: Shadowsocks.

It is likely that use of this protocol will be helpful for users in mainland China to work their way past the Great Firewall.

Surfshark has a wide range of apps that you can use to install it on almost any type of connected device. This includes everything from the widely used Windows and Linux or Mac platforms to mobile devices and even smart TVs and some routers.

There are also variants you can use with popular browsers such as Chrome and Firefox. It should be noted that the Chrome extension for Surfshark was audited by an independent firm in late 2018, passing with only two minor flaws found.

Checking out their customer support, I was very happy with the results each time. I contacted them twice, once with a sales inquiry and another with a question more technical in nature. Both times responses were fast (within a few seconds).

I was also happy with the level of knowledge displayed by their support staff who were able to resolve my issues quickly and efficiently.

The issues of the number of devices you can have connecting to a VPN has only come into focus over the past year or so. In the past, we mainly had to be concerned with protecting one static and one mobile device (usually).

Today, thanks to IoT, practically everything is connected to the Internet. One household can easily have up to 10 devices connected to various networks. My place for example has three mobile phones, three tablets, two desktop PCs, one laptop, a router and a smart TV!

Surfshark is one of the few VPN services around that doesn’t put a cap on the number of connections you can simultaneously use. True, this might not be a great thing, but it simply takes one point of concern right off the board.

Discussing VPN speeds is an entirely different can of worms, so if you’re not certain what makes your VPN go fast (or slow), check out my VPN guide here. Before testing Surfshark, I first ran a speed test on my line to gauge its speed at the time;

I chose Singapore for my Asia region test because it has some of the best infrastructure around and is a major transit hub for international connections. Honestly, my eyes nearly popped out of my head seeing I was able to hit 200Mbps on a downstream test.

The result is simply the best I’ve come across so far and I re-ran the test a couple of times just to make sure it was correct (it was).

Speeds from my connection to an Europe-based VPN server were just as good, with the telling sign mostly being in the longer ping lag.

From a US-based VPN server, speeds dropped for me again. This is usually expected since I’m physically as far from the US as can be. Nonetheless, 91 Mbps is still a great result and more than enough, theoretically, to stream video even at 8K.

Africa was the usual black sheep in the family, but still showed a better result than I could get from other VPN services. 47 Mbps may sound a little slow if you were to compare it to my default line speed, but it certainly is enough even to stream 4K video.

Netflix works, so I don’t think there’s too much else to discuss about that. A point of note though is that because of the increased ping for servers further away, there is a slightly noticeable delay in loading pages on Netflix. Slightly annoying but streaming still works fine.

If you’re considering using Surfshark on a month to month payment plan, the fees are around the same as any other VPN service on the market. Where it really shines is in their extended one- and three-year plan (12 / 36 months) which comes at only $3.75 and $1.94 per month.

This is one of the lowest prices I’ve seen and once you pair that with the near-unbelievable performance of Surfshark, a deal that’s very hard to beat. Personally, I feel that the one-year contract is an ideal sign-on period as well – not too long or short.

I checked with their support staff and confirmed that this price that you sign on for will be valid when it comes to renewal as well. This means that if you sign on for the three years plan at $69.99, there is no price hike on renewal.

* Note – Price checked accurate in July 2019. Click links to read our review and speed test results for each VPN services.

The first thing you need to know is that Surfshark limits P2P or Torrenting to a handful of locations; Canada, Germany, Italy, Japan, Netherlands, UK, US. For me this is especially concerning since the closest to my location would be Japan.

However, as you can see from the speed test above, the Japan server still performed relatively well for me. Unfortunately, that didn’t seem to translate very well into torrent speeds.

I ran a set of test torrents, looking for the most highly seeded movies I could find to note how they would do. The torrent download speeds were a fraction of what the tested speed was, for reasons unknown.

This happened a few times as a I tried various things such as swapping servers or using different sets of files. The fact is, Surfshark simply doesn’t seem to want to play nice with P2P all that much. You CAN torrent, but slowly.

When I ran the Surshark VPN app the first time, I wanted to see how well it would do with everything on default. All I did was install it, enter my credentials then click on ‘fastest server’. I was connected to a local server where I am – with dismaying results. The same thing occurred with the ‘Nearest Server’ option.

My advice would be to try it out first but if you’re getting terrible results, opt for an alternate server. Personally, my situation worked best connecting to a Singapore-based Surfshark server.

Normally I’m an even-keeled reviewer and I like to weigh as many factors as possible. This is tempered with both personal experience and I did my best to keep any bias out of it. Without a doubt, this time I can say that I am highly impressed with what Surfshark has to offer.

The service checks of many of the right boxes that make up a good VPN – Speed, Security, and anonymity. There are few ‘frills’ that many VPN services are throwing in just to edge out the competition and I find this focus on core services a wise move.

Surfshark is now on the top of my favourites list.

Earning disclosure – We use affiliate links in this article. WHSR receive referral fees from companies mentioned in this article. Our opinions are based on real experience and actual test data.