Article written by: Timothy Shim
The Internet has always been a little bit of a dangerous place and as time passes it is becoming increasingly so. Some of you may question the need for a Virtual Private Network (VPN) service, but from businesses losing our private data to cybercriminals and governments spying on our online activities, privacy is fast eroding.

If you’re still in doubt about the necessity, read our newbie guide to VPNs here for a ton of reasons why you need a VPN. On that note, I’d like to introduce ExpressVPN, one of the top providers in the world.

With servers in 94 countries around the world, ExpressVPN offers one of the most extensive VPN networks available today. It’s experience in the industry and the solid reputation it has built up over time is indisputable. 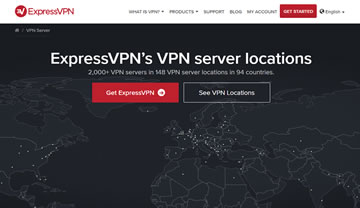 While there may be some VPNs that offer rates lower than ExpressVPN, I assure you that it is difficult to find one with the same quality of service. The performance as well as capabilities of ExpressVPN far exceeds that of many others.

One of the first things I’d like to point out about this company is that it is based in the British Virgin Islands (BVI). Although technically a dependant of the United Kingdom, local legislation here is independent.

Most importantly, there is no formal legislation regarding data protection in the BVI. VPN companies who decide to base the interests here are not subject to data retention laws, and ExpressVPN states clearly that they don’t log user activities, so it should be accurate.

To add another level of anonymity, should you decide to pay for a subscription with them, aside from the normal channels such as credit cards (Visa, Master, American Express, JCB, etc) and online payment wall (PayPal, UnionPay, Alipay, Mint, OneCard, Klarna, YandexMoney, etc), ExpressVPN also accepts some forms of cryptocurrency such as BitCoin.

ExpressVPN supports the highest available commercial level of encryption available today, AES-256. This standard is thought of as unbreakable at this point of time and is even used by many governments and militaries around the world.

Although it does support multiple connection protocols such as IPSec and PPTP, I highly recommend you leave the default settings in the client to Automatically select one for you first, before trying the alternates.

Watch this video to learn how ExpressVPN's tunneling and encryption works

Kill Switch – ExpressVPN comes with a kill switch option for those who truly value their security. A Kill switch is a software-activated security feature which severs your device from its Internet connection if for any reason the VPN connection is lost or otherwise interrupted.

Managed DNS – Some of you might be used to fiddling with alternate DNS management, but with ExpressVPN you won’t have to worry about that anymore. ExpresVPN comes with private and encrypted DNS, allowing your connection to go anywhere it wants to – irrespective of whether anyone is trying to block it.

Connect on Startup – Many of our devices automatically connect to the Internet the moment they are turned on. By allowing ExpressVPN’s client to start when your device does means that your protection will commence the moment it is turned on as well.

With such an extensive network, most people would assume that a VPN service would be fast and stable but let me assure you that this is not always the case. Thankfully, ExpressVPN does fit the fast and stable profile and in some cases, really surprised me.

Before I discuss speed with you, I would like to clarify some things regarding speed on VPNs. I have noticed some misconceptions where users try and use a VPN and blame the service provider when speeds are not up to their expectation.

VPN speeds depend on many factors, including (but not limited to); Your own Internet line speed, the capabilities of the device you’re using, what encryption protocols you select, distance from the selected VPN server and what you’re doing on the VPN server.

For the purpose of the tests I did before, I ran the tests from my current location in Malaysia on a line with an estimated actual speed of 230 Mbps down and 150 Mbps up.

With the US being around the world from my current location, I was surprised that I managed to get 83 Mbps download speeds on ExpressVPN. I have tried on several VPNs and this is not always the case. Uplink speeds were slightly weak at only 17 Mbps but I doubt many of us would be too bothered about an upload speed.

Although my normal choice of speed testing for Europe is normally wither London or Amsterdam, today I decided to choose Germany because the Autobahn was on my mind for some reason. In any case, I was again pleasantly surprised at the speeds I managed to obtain here.

Africa is usually one of the hardest segments for VPN services as they are quite out of the way. I have in fact tried some VPN services which had connections in Africa but were frequently either uncontactable or so slow that I couldn’t do much of anything.

Imagine my surprise when I connected to ExpressVPN’s South Africa server and got speeds exceeding that of my Speed Test with the German servers!

Being one of the most highly developed countries in Asia, Singapore did not disappoint and offered not only excellent speeds but also a fast ping rate. The ping rate quality was probably due to my proximity to the location more than anything though.

The land down under was fast as well, with speeds topping out close to 90 Mbps. Ping rates were about as expected in relation to the other locations I tested.

1- Pricing: Not Exactly the Cheapest Around

Note – ExpressVPN is currently having special Black Friday sales, price drops to $6.67/month plus free 3 months. If you think ExpressVPN is right for you – we recommend you to take this opportunity to save money.

Compare ExpressVPN prices with other VPNs

Real World Application: Is ExpressVPN Right for You?

If you’re a gamer and are thinking of using ExpressVPn to play on different server locations, I would not recommend this. There is bad lag on VPN connections that will likely throw off your game unless you’re connecting to a VPN server near your location. This would be pretty much pointless anyway, so do take note.

* Notes on the Tests

All these tests were run on the default protocols and settings in the ExpressVPN Windows client. I did try to run ExpressVPN off my router, but since I have a budget home router, the speeds were appalling. I do not recommend running a VPN service on a home router unless you have a top-of-the-line model such as the Netgear Nighthawk X10 which is horribly expensive.

My test device was a new laptop running an Intel 8th Gen chip. I suspect that this was my bottleneck in some cases and you may get higher speeds if you run the VPN service off a new desktop PC with more processing power.

Streaming and P2P with ExpressVPN

With speeds on all servers that I tested being so high, there should be technically no issue with streaming even 4K movies over an ExpressVPN connection. I understand some streaming services are geolocation-restricted and yes, ExpressVPN helps with that as well.

Connecting to the UK, I tested out BBC’s iPlayer (I even registered for a free account with a UK postcode on the site) and it works fine.

Torrenting or P2P is very dear to my heart and I am happy to report that ExpressVPN works very well with P2P activities. In fact, unlike some services which restrict P2P activities to certain servers, ExpressVPN does not.

All you need to do is stick to the smart location connection and run your P2P program and it will work. Word of advice – it does take some time for the ports to map out correctly and then your torrents to start downloading. Do not be alarmed and just give it some time – it will work!

Speeds were smooth and in fact, I think that P2P traffic was able to gain better speeds than usual for the connection. Strange, but true.

Verdict: Is ExpressVPN a Good Choice

While there may be some VPNs that offer rates lower than ExpressVPN, I assure you that it is difficult to find one with the same quality of service. The performance as well as capabilities of ExpressVPN far exceeds that of many others.

I feel that there is very little to complain about the service. It has ample number of servers in a good geographical spread, fast connection speeds and an excellent reputation in the field. It excels in exactly what it was created for – Privacy and Security.

Earning disclosure – We use affiliate links in this article. WHSR receive referral fees from companies mentioned in this article. Our opinions are based on real experience and actual test data.