Reviewed by: Timothy Shim
Shopify Review
Plan in review: Basic Shopify
URL:  https://www.shopify.com/
Reviewed by: Timothy Shim
Rating:
Summary
Shopify is a strong contender as an online store builder. However, if you’re looking for a simple website builder this might be a little over the top for your needs. The additional tool integration is good though and might be worth considering in its favour.

Shopify is a leading name in the online shop builder community and that makes it naturally double up as a site builder.

With more than half a million eCommerce stores powered by Shopify it surely has something for everyone, right? Let’s take a closer look at what’s on offer and see if it will suit your needs.

Although Shopify is an eCommerce store designer it also considers that some developers will still be using it to build one on behalf of clients and that’s a neat thing to remember. Signing up requires a little more detail than I’m used to but I guess it’s helpful for an online store to gather a lot of this information up front.

There are a few free themes available, but similarly to BigCommerce, there are a whole lot of premium (expensive) themes available and you can even build your own and upload it. However, the focus remains very much on selling and that’s where I think Shopify has done exceptionally well. Shopify has good integration with third-parties such as various online tool providers

If you’re a seller, you’ll know that offering your customers multiple payment options is a good thing. Shopify has many payment options available such as credit cards (through multiple gateways) PayPal and even BitCoin! There are also the more traditional options like bank transfers or Cash on Delivery if you’re into that. Uniquely, there is Shopify Payments that can be fully integrated with your store. That way everything runs through Shopify with no need for gateways or anything else.

You’re also future-proofed in the sense that Shopify has included a built-in mobile e-commerce shopping cart. This way your prospective customers can shop and pay from your store right from their mobile devices.

Shopify uses Liquid, an open-source template language in Ruby, to create their themes. A extensive list of cheat sheet is provided for those who wish to build Shopify themes from scratch.

For its range of services Shopify is around standard in pricing. There are three tiers which ring in at $29, $79 and $299 – each which also has added transaction fees per sale. The price differences mainly reflect additional marketing options such as gift certificates, extra shipping rates and more shopping cart options. 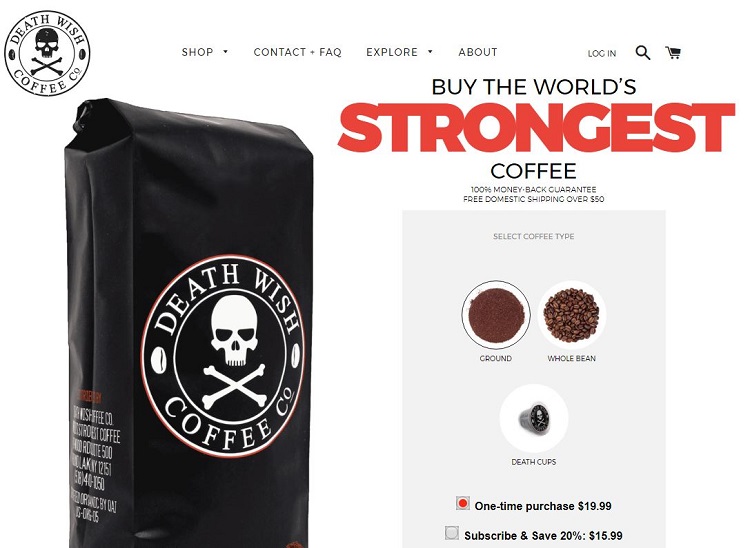 Death Wish Coffee is among one of the thousands of unique small businesses that make up the Shopify ecosystem. I’ve found that most Shopify users are small to medium business that offer niche products and that’s a very good thing since it reflects well on the level of support and commitment that Shopify offers to them.

Yet another strong contender as an eCommerce builder, Shopify is powerful and extensive. However, if you’re looking for a simple website builder this might be a little over the top for your needs. The additional tool integration is good though and might be worth considering in its favour.

Also – Learn the Three ways to create a website.