How SiteW Established Itself As A Website Builder For Creatives

The Internet has always been a powerful platform for creatives to showcase their work and with the advent of website builders, it’s becoming more and more easy for creatives to establish an online presence with a website.

Ever since its inception, SiteW has been working towards establishing themselves as the premier website builder for creatives in France and across the globe. We’ve managed to get a quick chat with their CEO Fabien Versange and CTO Cėdric Hamel to get to know more about SiteW.

The Humble Beginnings And Rise of SiteW

SiteW was first conceptualized by CEO Fabien Versange and CTO Cėdric Hamel back in 2007. Both were fans of computer science and technologies and the two friends had been creating several sites for relatives back then. This collaboration sparked an idea for both friends to start a company that specializes in website building.

The idea behind SiteW was to create a platform that would allow users to build a website that’s not only visually appealing but also very easy to use and create.

We wanted to create a platform (or an online tool) that lets everyone build their own website easily.

With that vision in mind, Versange and Hamel began work on the foundations of SiteW with a Beta version of the site launching first in December 2007. The public version was then launched in February 2008 and within weeks, they had their first site created.

Since then, SiteW had gained tremendous success as a website builder within and outside of France. The site started with a France and English version back in 2008 and later expanded to German in 2011 and Spanish in 2016.

As of today, SiteW has created over 1,500,000 websites with users from all corners of the globe. Despite that tremendous milestone, Versange and Hamel never lost sight of what their vision for SiteW should be, which is a platform for creatives.

Creating a site needs to be as easy and enjoyable as playing a game.

A Specialized Platform For Creatives

Their rise to prominence and the success that SiteW received was possible due to Hamel and Versange steadfast belief on a platform that caters to creatives. Of course, the backbone of SiteW’s success has always been the features that they offer.

The simple 3 package plan allowed Versange and Hamel, along with the team at SiteW, to focus on providing the designs and features that their users would want and need, while still giving the freedom of choice on where to start.

Their Starter package offers all the basic necessities to start a website and is completely free and ad-free. Their Premium package, on the other hand, offers unlimited pages, interactive features, SEO tools, and a custom domain name, which makes it a perfect choice for serious website owners.

Finally, their Pro package includes all the features in the Premium package plus the ability to create an online store.

Given that every website will have their own unique needs, they try to give many features as possible so as to fulfill the needs of any business or individuals who want to create and host a website on their platform.

SiteW perfectly matches all business sectors: our designs and features meets all of our users’ needs (photo gallery, calendar, contact form, blog, online store…), all while making our platform every easy to use with our online website creation tool. All this makes SiteW one of the best evaluated website builder by users (9.5/10) on sites such as TrustPilot.

Reaching Out To An Audience

From the get-go, Versange and Hamel knew that SiteW was focused on being a platform that allows those working in creative fields, such as photography, to create a visually stunning website in a way that’s both easy and fun.

But their target audience wasn’t just restricted to those who are in the creative fields. SiteW was built from the ground-up on the emphasis that anyone could make a website and make it look good while still being a fun process.

“SMFs, associations, communities, private individuals who want to share their passion, that is our target audiences at SiteW,” notes Versange.

With a platform that’s able to cater to all kinds of users, SiteW was able to gain more prominence and quickly became the go-to website builder for those who are keen to create a visually stunning website in France and beyond.

Building Up An International Presence

While SiteW experienced great success in their home country of France, both Versange and Hamel wanted to make the platform more than just a homegrown success. They wanted SiteW to have a global presence, which sparked the expansion in different languages and territories.

In order to establish their presence outside of France, there were a couple of things that Versange, Hamel, and the team at SiteW had to do.

“We recruited translators that helped with getting our tools, guides and FAQS completely translated and provide tailored assistance. To add to that, we conducted partnerships with blogs and online services that are interested in website builders to put a spotlight on us.”

The strategic move seems to had paid off handsomely as SiteW continues to be a popular website builder for many international users, especially in the German and Spanish territories. But enjoying such success does not mean being complacent, as Versange and his team clearly still has the bigger picture in mind.

With more than 1,500,000 websites created, it’s clear that our French users, as well as our foreign customers like SiteW. As such, we want to keep growing up. The larger our team is, the more we can develop new features for everybody. 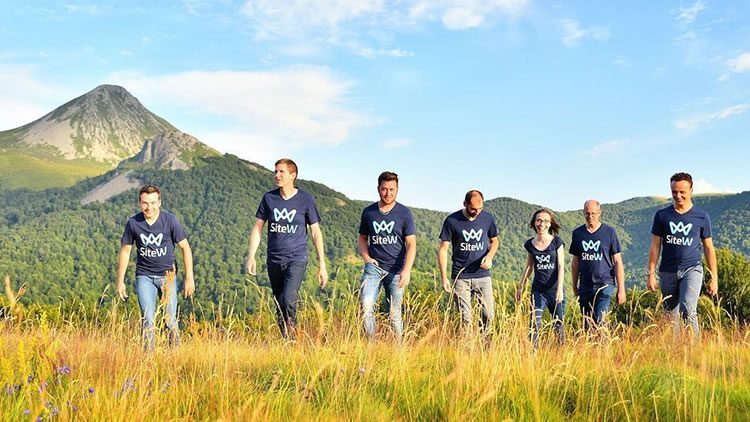 Venturing into the international market was a huge step for SiteW and while this has led to the company to grow bigger, Versange and Hamel never overlooked the importance of their French users and how they were the key to their initial success.

“Our French people are quite patriotic. They make French companies their first choice.”

In order to maintain their position in their home country, The team at SiteW continues to provide the best web building features and services for their French users by understanding what their needs and wants are, and how they differ from International audiences.

We know that the French people are quite resourceful. However, they prefer human interaction and being personally assisted. The priority at SiteW has always been attentiveness and satisfaction. This is why we are evaluated as 9.5/10 (by users) on Trustpilot.

A special thanks to both Fabien Versange and Cėdric Hamel for chatting with us and sharing some of the ideologies of SiteW. It’s clear that both Versange and Hamel, and the team at SiteW, are passionate about bringing a great platform for creatives to build their online presence.

As it is now, SiteW is definitely on the precipice of leading the creative revolution in the website building industry. We’re definitely interested to see how SiteW will continue to grow and evolve for the years to come.