Home › Blog › Hosting Guides › Target vs. Wal-Mart: Whose Server Is Faster? (& Why It Matters)

Target vs. Wal-Mart: Whose Server Is Faster? (& Why It Matters)

When choosing your next web host, speed should be at the top of your considerations.

A faster web host means a better experience for your users and customers. It creates a stronger foundation for your business, and it will even boost your profits.

To prove just how important speed is to your web presence, I tested two of the biggest websites on the planet.

What I found was a strong connection between speed, user experience, and sales prowess. But which one came out on top?

These two giants are the biggest rivals in the US retail market. On the highstreet, Wal-Mart dominates. It has more stores and it employs more staff. However, take a look online, and it’s a different story.

It all starts with server speed

Target’s server-response time (the speed of its web hosting) is significantly faster than its rival in the US – its main market.

According to Bitcatcha's free server speed test, Target is 84ms faster on the west coast. Meanwhile, on the east coast, it’s 37ms faster than its rival.

It’s worth noting that server response time is the foundation of the site. It’s the engine, if you will. It measures how quickly the web host responds to a request. It is not the overall load speed*.

However, if the engine is slow, so is everything else.

Imagine a car with a slow engine. No matter how much you tweak the bodywork, it will still be sluggish. The best way to make it faster is with a speedier engine. Or in this case, a faster web host.

Let’s see if our hypothesis is correct. Using three of the industry’s leading website analytics measurements, we can answer one big question.

Alexa – one of the biggest analytics companies on the planet – confirms that Target’s total load speed is a whole half second faster than Wal-Mart (in America).

These results are backed up by data from Pingdom and GTMetrix.

As you can see, when the core foundation of the site speed is slow, it can kill the entire loading time. In this case, Target is a whole 25% faster than Wal-Mart. And it all starts with the web host.

Why Does Sever Speed Matter?

Despite all this, half a second might not sound like much of a problem to you. So what are the effects on Target and Wal-Mart’s business?

In the next part of this article, I’ll show you why a slower website negatively affects the entire online business.

Also read the factors we considered in choosing the best web hosting for businesses.

As a business, a low bounce rate is crucial. The bounce rate is a simple measure of how many people abandon the site before clicking on anything. They either give up and leave, or don’t find what they were looking for. Either way, it’s bad news.

Slow websites are intricately related to a high bounce rate. Why? Because customers don’t like to hang around waiting for a website to load. They’re immediately frustrated, and much more likely to click away.

By this logic, Target’s faster website should attract a much lower bounce rate.

According to Alexa, Target’s bounce rate is a whole 4% lower than Wal-Mart. That means more customers are engaged with Target’s website, while visitors at Wal-Mart are leaving much faster.

Of course, there are all sorts of factors that come together to create a good bounce rate. However, it’s impossible to ignore the clear link between speed and engagement in this particular case. Speed is clearly a factor in Target’s lower, superior bounce rate.

As you can see in the graphics above, Target also has a higher daily-pageviews-per-visitor rate. In other words, customers are browsing more pages on Target than they are on Wal-Mart. In the world of digital marketing, Target is ‘stickier’ than Wal-Mart.

Visitors are digging deeper, and looking at more pages. It’s a sign of a stronger user experience. Again, we can hypothesize that website speed is a key factor here. The fact that each page loads quickly means customers are happy to flick between products.

In the interests of fairness, it’s worth noting that Wal-Mart has a longer average time-on-site, beating Target by 20 seconds. We can generally attribute this to quality of content. Arguably Wal-Mart has better content and more reviews. However, overall, the stats show that Target has a stronger user experience.

Of course, the most important metric to Wal-Mart and Target are sales. These are retail giants who live and die by their sales targets.

According to general observation, faster websites lead to more conversions, and better sales. Why? Because customers are more engaged. The bounce rates are lower, so customers are sticking around to buy. The experience is generally more positive, so they feel more inclined to buy online.

Speed also equals trust when it comes to e-commerce. We naturally connect speed and professionalism. Quite simply, we’re more likely to buy from a faster site. But, do the statistics add up?

At the end of February, Wal-Mart and Target announced their fourth quarter reports, and the numbers make for interesting reading. 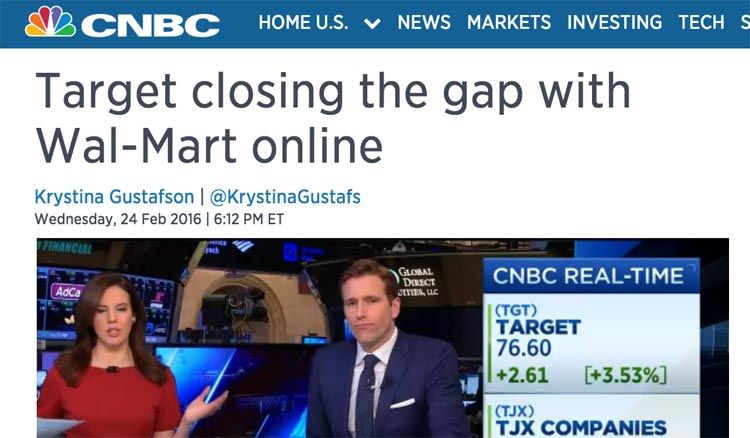 According to the reports, Target’s e-commerce division is growing much faster than Wal-Mart. Although Wal-Mart still sells more overall, Target is growing faster.

Target’s online sales rose a staggering 34% in the fourth quarter, compared to Wal-Mart’s 8%.

Of course, we’re not naive enough to attribute this entire boost to half a second’s website speed. However, it is certainly a factor. There are all sorts of reasons why Target’s online sales are soaring. But, a core aspect is their superior website performance. They know that the world is shifting to e-commerce and mobile in particular.

As a result, they’ve put the infrastructure in place to provide the fastest and most powerful user experience.

We’ve always believed that a faster website foundation leads to better online experience – and ultimately better sales. Now, it seems that one of the world’s biggest retailers is proving the point.

Daren Low is the founder of Bitcatcha.com and co-developer of the free Server Speed Test tool. With a decade of experience in website development and internet marketing to his name, Daren is considered a premier authority on all things related to building and managing an online presence.