Most Joomla! users are no stranger to the name CloudAcccess.net.

Headquartered in Traverse City, Michigan, CloudAccess.net is the official hosting partner for Joomla! since 2010. Every month, more than 30,000 new users sign up for their services at CloudAcccess.net – which, if you do the math, that’s more than 800 new Joomla! demo users daily.

At this time of writing, CloudAcccess.net works as a Platform as a Service company that facilitates both Joomla! and WordPress content management system. In April 2014, Jonathan James Gafill stepped up and filled Gary Jay Brooks position as the CEO of CloudAccess.net. With the help of Saurabh Shah, I was able to squeeze into Jonathan Gafill’s busy schedule for an online interview to talk about the company and his new role in the company.

Hello Jonathan, I am honored to have you on WHSR today. Let's start with some introduction, shall we?

CloudAccess.net was first started as a web design and consulting company named Michigan Media but now it’s one of the most recognized names in Joomla! hosting. Can you tell us more about the story behind the company's success?

Gary Brooks was the brains and brawn behind the whole thing. He got started with Joomla while developing sites under the name Michigan Media.

During this time, he saw the opportunity to improve the previous Joomla demo program and he pursued his vision while overcoming some major hurdles along the way. He turned a 30 minute demo of Joomla into a 30 day trial with a scaffold of support systems to ensure new users became comfortable with Joomla. CloudAccess.net has successfully grown leaps and bounds largely due to Gary’s vision and determination. We all commend him for that. I was fortunate enough to have the leadership baton passed to me when Gary decided to step away as CEO.

Congratulations on being promoted to the CEO role. What is it like to run a fast growing, global company like CloudAccess.net – What's your typical day at work like?

It’s an honor and I feel privileged to be a part of this. We have built a great culture around CloudAccess.net, and it’s a joy to come into work each day.

My typical day starts with a bike ride to the office around 8 am (when it isn’t snowing). I’m a big proponent of the zero inbox philosophy, so I’m typically able to jump right into a diverse assortment of daily tasks and meetings. Each day comes with its own set of new challenges, and I look at every single one as an opportunity to improve and grow. Generally I’ll take part in a few foosball battles (table-football for our EU readers) and practice my putt-putt or dart throwing skills from time to time. When I feel that I’ve accomplished a good day’s work, I ride on home to tinker in my mad scientist layer.

The Platform as a Service Business

CloudAccess.net stands out as the sole hosting partner with Joomla! for more than 4 years and that says a lot about your team and the company. In your opinion, what are the secrets of CloudAccess.net success?

Thank you for the kind words. In my opinion, our success can be attributed to two things: first, we have brought together an exceptional team. Secondly, we have lead our team towards exceptional goals. We adapt throughout every success and failure, continually learning how to collectively become an even better company. The secret is to collaborate in a way that continually facilitates improvement.

In the beginning, Joomla was our primary focus. We ran with it and held on tight as the company skyrocketed. Along the way, our clients wanted to be able to manage their WordPress sites in our Cloud Control Panel (CCP), and they wanted our superior Support Team standing behind them as they built. Since then, we have introduced WordPress as a completely integrated product offering throughout our entire platform. While we will always be a Joomla shop at heart, we are finding there is a demand for variety … and people simply love our control panels and team.

Good to know that CloudAccess.net now offers WordPress hosting. But let's talk a little more about the company's partnership with Joomla! – I understand that the company gets almost 1,000 new Joomla! sites each day. What’s the biggest challenge of running a web host with such high turnaround rate?

We do have a large number of demos being launched each day. At first, the challenge was building the systems to allow for this kind of scaling. Then there was the challenge of handling the interaction with all of these users, especially when you consider that we provide a level of support for the demo clients that surpasses what most hosting providers give to their paid clients! In the past few years, we have become accustom to the load and have built automation and systems to help with the pain points … now we are off working on other challenges.

What are some of the advantages of using Joomla! for a business site?

Beyond that, I think it’s the perfect mix of “easy” and “versatile”. Let’s face it, a small/medium size business has incentives for building and administrating their site in house if they can execute properly. Joomla excels in this scenario, and more so if the business has a team to provide guidance and help from time to time. That is where CloudAccess.net comes in. We provide a platform, intuitive control panels and a team that ensures the business is successful in using Joomla as well as other applications like WordPress.

It’s true, some people have doubts about their ability to learn new things – especially in the world of technology.

In this case, we encounter a lot of people who feel they are “non-techies”. We embrace these people and guide them as they learn. In time we see these same self-proclaimed “non-techies” turn around and build beautiful sites for themselves, their friends and their family members. And it’s not because Joomla is extremely easy to use … it’s because they know they can count on CloudAccess.net to guide them with live webinars, tutorials and hands-on help.

CloudAccess.net Future Plans and Beyond

Jonathan, we have seen quite a few large acquisitions and mergers in recent years – millions, if not billions, were made by hosting companies’ founders. What’s your thought in this? Is selling-out or buying other companies part of CloudAccess.net’s plan in the next 18 months?

Gary Brooks has stayed on as our owner, but he has made it public that he has plans to sell the company if the situation is right.

We are cooking up some serious innovation… things that nobody else is doing. After using our Cloud Control Panel, clients reiterate that cPanel belongs in the history books. We have a well thought out infrastructure and our client base is growing quickly. Furthermore, we have built a team that is second to none. This equates to a valuable company that is only becoming more valuable as time goes on. It’s hard to predict the future, but we’re all excited about what is to come.

That's all for my questions, thank you very much for your time. Is there anything you wish to add before we end this Q&A session?

Thank you for having me! J 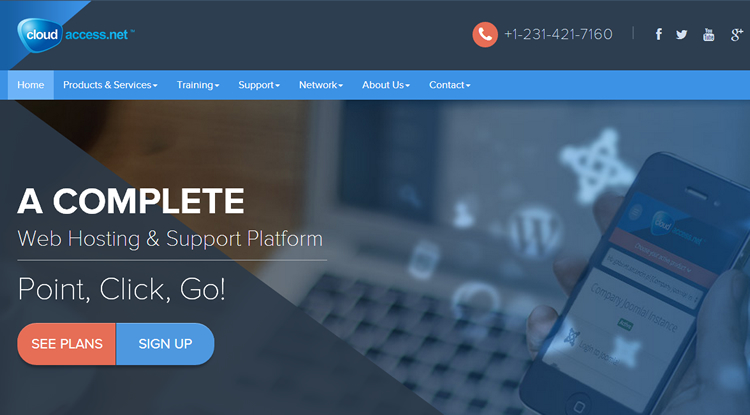 You can connect with CloudAccess.net at: