BlueHost vs Hostgator: Who Is The Winner? 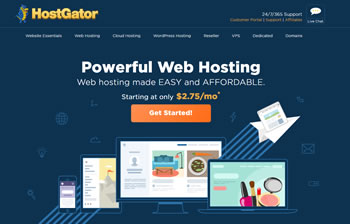 Both names are well known in the industry and that’s perhaps what prompted a buy-in from Endurance International Group (EIG) to them. Today they have both grown considerably and offer a full range of web hosting services to their customers.

If you skim the surface on each, BlueHost shared hosting seems to the be value proposition of the two and offers very good buy-in prices starting from as low as $2.95 per month if you opt for a 24-month contract. HostGators starts at higher amount, from $3.58 per month.

Stat for stat they are strikingly similar as well, for example both favouring the one-click software installer from Mojo Marketplace and making use of the cPanel interface. There is also the built-in site builders along with free SSL via Let’s Encrypt.

Although BlueHost has free site backup services, access to its BlueGuard Backup service will set you back $35.88 per year compared to HostGator backup which you can get for $24 per year.

Performance-wise, while both of these hosts clock in at below the 500ms mark for TTFB, HostGator really excels on their US-based servers which click in at an eye-opening less than 50ms TTFB. This is extraordinary by any standards.

HostGator also has an edge in terms of support documentation. Perhaps that is one reason why it was consistently voted as most popular blogger’s hosting choice based on our own 2014 and 2016 surveys.

Unfortunately, where there are ups, there are downs and again we see some similarity between BlueHost and HostGator. Both have expensive renewal fees (over 100% increase after first contract). Pricing disadvantages continue the same across the board in terms of server upgrades which will set you back slightly more than the norm.

As with many EIG-based services I’ve seen, HostGator also suffers in customer support with some long waits necessary for live chat support. No major issues have been seen in this area for BlueHost though, surprisingly.

As a first-time option, it isn’t difficult for me to support either of these hosts as they are both a good choice for starter accounts. In fact, I think even larger (small to medium) businesses can host safely at either as they do have very scalable services and a broad service spectrum.