Where do Bloggers Host Their Blogs? WHSR Web Hosting Survey 2015

In January 2015, I reached out to a handful of bloggers and did a quick hosting survey.

The purpose of this survey is simple, I want to know –

Don't listen to what people say, watch what they do

If you are shopping for a web host currently, here's an insider tip for you – The best way to find a good web host is by checking out where the pros are hosting their sites (of course, this is only true if you understand what are your hosting needs).  As the wise said – “Don't listen to what people say, watch what they do”.

In this post, I will show you the outcome of this survey and some quick statistics in the first part; and dig into the details as well as my personal remarks remarks later.

Credits – special thanks to:

But first and foremost – I have to say thank you to all the bloggers who took part in this survey. They gave very helpful advice and feedbacks in this survey – everyone please support them and visit their blogs.

I contacted 50 bloggers via email personally and shared my Google survey form repeatedly on Twitter and Google+. I tried to reach out more bloggers on HARO but it's a shame that my query was not published.

In total, we have got 36 participants in this survey – not a big number, but still, there are plenty of takeaways I would say.

There were 43 votes and 21 names mentioned by the 36 bloggers I interviewed. These hosting companies are, in alphabetical order – A Small Orange, A2 Hosting, All Inkl, BlueHost, Cloudways, Dream Host, Fat Cow, Go Daddy, Hostgator, Idologic, InMotion Hosting, IX Web Hosting, Kinsta, Known Host, Little Oak, Media Temple, Site 5, SiteGround, Traffic Planet, Weebly, and WP Engine. One blogger told me that he rent his own server directly from a data-center – which is quite a surprise to me.

Note: Web hosts with only one mention are grouped in ‘Others'.

What do you like the most about your web host? 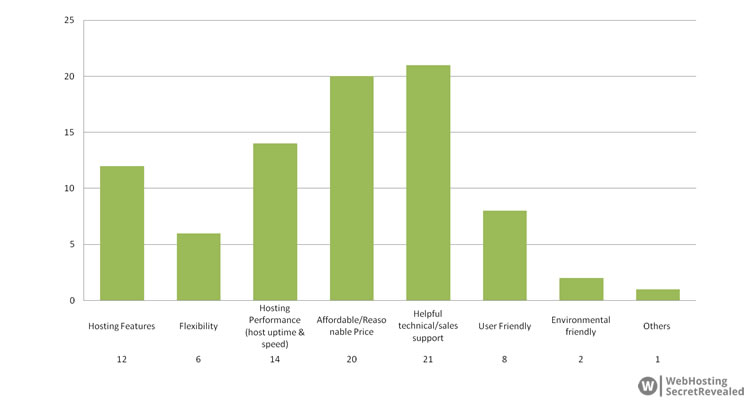 Do you plan to switch host in the next 6 months?

Many of the bloggers that I interviewed gave more details than I asked – which is so kind of them (thank you very much, again!).  Here are more details and my remarks on the survey results.

Given the issue with their live chat system, I did not expect so many bloggers are still sticking with Hostgator hosting. The Gator stands out as the ‘champ' in this survey (seven out of 43 bloggers host their blogs at Hostgator) – even though most of them noticed the long wait time in Hostgator live chat support (read reviews below).

“Been with them [Hostgator] since 2008 and have not had any major issues. The Live support has become the worst thing on Hostgator. It's becoming more and more difficult to get help either by mail or live chat. Looks like it's the worst in the industry at the moment.”

“People might've noticed HostGator has gotten very slow in live support. Previously, it was 2-3 minutes, but now it is taking 30 minutes or longer. Just to clarify, I think, this is the consequence of data center transfer as off the owner has changed. Though I should let you know, HostGator was the company who provided the fastest live support ever. The existing customers are thinking to move from it where the new customers think they will be trapped by getting themselves in. But I think, we should give them a chance as they are gradually overcoming. The company was the gem of hosting in last few years. There has to be a tough reason for all these difficulties. But that never means they are a bad host.”

SiteGround – New kids on the block

A total of five bloggers are hosting their blogs on SiteGround.

“One reason I chose them [SiteGround] is that they offer WordPress support. I also got a good introductory deal from them.”

“Siteground offer shared hosting at a very affordable price, much like HostGator of Bluehost. But unlike those two, they also offer a range of locations (USA, Europe or Asia, which means you can focus on where your users are. Also they have a built in caching mechanism, which also helps load your site faster (often better than many of the WordPress plugins many use). There service and WordPress knowledge is also amazing!”

If you follow me on Google+ or read my WP Engine review, you'd knew that I developed a love-hate feeling on WP Engine. On one hand WP Engine offers blazing fast servers and great reliability (according to the four bloggers who host their blogs at WP Engine); on the other hand, the web host seems extremely over-priced (according to two bloggers who ditched them).

I guess WP Engine is doing great and lousy in the same time (forgive my weird logic).

Here are some positive WP Engine reviews I have got –

“I like WP Engine because of quality customer support and the increased site speed – though it doesn't allow users to create professional branded emails.”

“So that’s the main reason why I moved over to WP Engine. Because it’s fully managed, dedicated to WordPress which is pretty much what I use. And rather than hiring some guy who’s just their job is to keep my site up, if anything ever got hacked, it’s their job to fix it; WP Engine does all that. It was cheaper to do it this way.”

“I shifted from WPEngine to Cloudways and wouldn't recommend WPEngine to anyone with high traffic. Their overage charges are insane and something which hurted me a lot last year.”

“I migrated to Kinsta about 3 months ago from WP Engine after I got fed up with the overage charges based on visitors counts. Kinsta doesn’t charge you based on visitors. Kinsta has time and time again beat WP Engine’s speeds and is cheaper. They also include a free 14 location CDN with every plan.”

A few bloggers who gave their reason why they are or are not planning to switch host for the next 6 months. Here are a few to chew on –

“I'm really excited about Digital Ocean and how they function, so I might try my hands on it soon and see how they work on heavy traffic blogs.”

“Nope, I am not leaving Kinsta anytime soon. They are doing some awesome things and I plan to be with them for a long time.”

“Mad Lemmings is getting close to outgrowing this plan, and I am also heavily focused on user experience and site speed. So in the near future I am looking at moving to either Cloud or VPS hosting.”

And here's Kulwant Nagi's comment – which I think gives us a valuable lesson in regard of switching web host.

“In the last 2 years I have switched 4-5 hosts as all were creating some issues. I used HostGator, BlueHost, KnownHost, DigitalOcean and Linode respectively.

If I’ll not be satisfied with the current host, for sure I would switch.”

I know too many bloggers who are too lazy or afraid of changes and often get excuses like these – “I do not have time to move my blog to other host. What if changing host jeopardize my search rankings? What if the new host sucks? Blah blah blah blah…”  All I can tell these bloggers is shut-the-f-up. If a web host is not treating you right – switch.

In case you need help, here's a step-by-step guide for you.

Others – Known Host, All Inkl, and A2 Hosting

“I have been with Known Host for around 20 months now. They have fantastic prices and I have never had a problem with performance. Sure, I have had some outages due to DDOS attacks. I was not happy about that happening, though that occurs with every hosting company. By far their best feature is support. 99% support tickets are answered in under 5 minutes. In fact, I have had some tickets that have had a reply with an answer in under a minute. Their support is 24 hours per day too. Whenever something happens to my website, be it a spike in CPU time or a phishing attack by a spammer, I want support to handle it quickly, effectively, and politely. And in my whole time with the company as a customer, they always have. That is why I do not see myself moving host anytime soon.”

“Of course, no host is perfect. So, I decided to choose all-inkl.com, because the support and the performance is really good and was very important for me. The price is justifiable with around 8€ (9,27$) per month. Some nice things, like the eco-friendly image and the transparency, make my decision final. I also looking for human opinions about this web host. The consistently good reviews gave me a good feeling for choosing the right one.”

What I like about the most about A2 Hosting – Tech support is fast to respond. If I send them an email, they respond in less than an hour.

A2 is a little more expensive than my last hosting company, Downtown Host, but they have resolved issues for me within minutes and have a lot of additional perks. Thanks to Jerry Low for recommend A2 to me when I was preparing to switch hosts. His reviews are always spot on for web hosting.

Your turn! Tell us where do you host your blog

Well that would be all I'm covering today. Now it's your turn to share some info with us.

Who is currently hosting your blog? What do you like the most about your web host? Are you planning to move in coming six months?