How Does Wikipedia Work?

Founded a mere three years after Google was incorporated, Wikipedia is today the largest multilingual, web-based, free encyclopedia. In fact, it is so high in resources that it is surprising the site didn’t rank a special catchphrase like “Google it” (Personally, I blame it’s unglamorous sounding name).

Yet despite that, according to Alexa, Wikipedia today ranks as the fifth most visited site on the Internet, trailing behind the likes of Google, YouTube, Facebook and Baidu in that order. What is it about Wikipedia that so many people love and yet, so few really speak about? 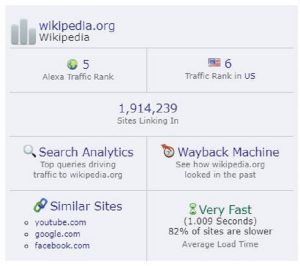 Started by Jimmy Wales and Larry Sanger in 2001, the concept and technological foundation of the site predated this.

The year was the actual launching point of the site, where it was running from the get-go. It is self-defined as “a free encyclopaedia, written collaboratively by the people who use it.”

Today, Wikipedia is one of many “Wiki” sites owed and administered by the Wikimedia Foundation, a non-profit organization that has dedicated itself to a daunting task: free knowledge for all.

Yes, even non-profits need to earn money. The only difference is that non-profits channel their funds back towards furthering their mission, instead of doling out huge amounts in dividends to shareholders and owners.

So as a free service which does not even run ads on their site, how does Wiki stay afloat?

After all, there is significant cost in salaries, technologies and even web hosting! Just web hosting alone costs Wikipedia over US$2 million annually.

The answer is simple – most funds are donations.

In the 2017 financial year, the Wikimedia Foundation raked in over US$80 million in donations – more than 90% of its entire revenue. Deduct its overhead such as salaries and other costs and the foundation is still raking in over US$20 million a year.

It takes the foundation only 9 cents to raise each dollar that comes in. In the words of Jimmy Wales himself, “The Wikimedia Foundation is incredibly cost-effective. Our annual budget is minuscule compared to a lot of very worthy causes, and our impact is absolutely enormous.”

Wikipedia content is created by everyone. It is in fact one of the earliest instances of crowdsourcing, started before the term was ever officially coined. People who create and maintain this content are from all over the world.

This allows them to bring together a wide range of skills and expertise to develop what will essentially be content that is accurate, laid out following specified guidelines and up to date. It also allows other nuances to flow in, such as individual style and narration.

These contributors are called “Wikipedians”, or “editors” and almost all are volunteers.

Aside from content creation, Wikipedians follow strict guidelines to ensure that the content put out is correct. To assist in that, they also act as a self-policing force, checking up on content created by others and ensuring that it follows the proper guidelines.

How YOU Can Contribute to Wikipedia

Once any content has been created by a Wikipedian, as mentioned above it is critically reviewed via consensus. Thanks to digital technology, Wikipedia is not limited in length of content unlike a print version. What is strictly limited though is on what content can and cannot be included.

Beginner content creators are often encouraged to start off by looking at existing content and testing their skills there. This is done by going over it and making corrections in the case of inaccuracies or adding content to extend the usefulness or accuracy what’s already been done.

If you’re still unsure about editing content, you can click here to visit what Wikipedia calls a ‘Sandbox’ and see if you can get used to using their editor. It’s not very difficult and similar to a word processor, albeit with more functionality geared towards it’s online nature.

The Wikimedia Foundation states that:

It is Wikipedia's policy to add to the encyclopedia only statements that are verifiable, and not to add original research. The Wikipedia style guide encourages editors to cite sources. Detailed citations allow readers of the article to easily verify the content in question.

This simple statement tells it all.

To join the ranks of Wikipedians, all you need to do is head over to Wikipedia and register for an account. You will then be encouraged to thoroughly review all guidelines and tutorials on what Wikipedians should or should not do to keep the site in top condition.

Of course, some pages are ‘protected’ meaning that you won’t be allowed to alter them directly. If you spot any protected pages and feel they have errors or be improved, you can get in touch with an editor that can edit it and make a request.

Again, do take note that Wikipedians are strictly volunteers and do not get paid.

Wikipedia is Available in Multiple Languages

For those of you who are non-native English speakers, don’t fret, you can still contribute towards this fantastic site. Wikipedia has content in over 300 different languages, from Afrikaans to Winaray (a native regional language of the Philippines).

If you are not comfortable contributing in English, just pick one of the many languages available and you can still join in. The most popular language remains English though, followed by Cebuano and Swedish.

Of late, there has been a little concern that the number of English language editors has been declining. In 2014 The Economist published an article titled “The Future of Wikipedia”, based on data published by Wikimedia. The magazine did a trend analysis and found that over a period of seven years, the number of English language editors fell by as much as 30%.

So reliable has these core policies made the site that in 2017 – 2018, Facebook and YouTube stated that they would rely on Wikipedia to “help their users evaluate reports and reject false news”.

According to Noam Cohen, writing in the Washington Post,

YouTube’s reliance on Wikipedia to set the record straight builds on the thinking of another fact-challenged platform, the Facebook social network, which announced last year that Wikipedia would help its users root out fake news.

Wikipedia has stated that there are many people who currently make use of their content and it welcomes more to do so. However, reuse needs to be met with compliance with whatever license applies to the content you wish to reuse. The same applies to images on the site.

While there are guidelines within both these licenses (e.g. attribution, access to copy, etc) the right to use most of the content does not have to be purchased.

The Future of Wikipedia

As mentioned earlier, there has over the years been a general decline in Wikipedia content editors. This is attributed by some to the very foundations on which the site is guided – strict compliance to core policies.

Those same policies that have made it a reliable source for the likes of YouTube and Facebook have also turned it into a harsh environment for new editors to contribute in. Sadly, the Wikimedia Foundation can’t order the volunteer community to change the way it operates.

However, the foundation has acknowledged that its operational methods may have become out of date and it has been tweaking its website and software in the hope of moving towards a more sustainable journey.

Only time will tell if these changes will be enough to allow new editors and volunteers to approach and band together for the good of the world. I do believe that the original mission Wikipedia set out on was a good one, and hope that others may see the good that still remains.