And of course, we have one of the most famous, Facebook. Facebook is a social content-sharing platform, but it doesn’t create any content of its own.

Taken in its simplest form, the answer can be summed up into a single word: Advertising.

This answer however, might not satisfy many people since Facebook is currently capitalized to a tune of roughly $543 billion. That’s a lot of money for a company that does nothing but basically let people share updates about their lives on their platform. In comparison, Microsoft, which builds both software and hardware for sale around the globe is currently valued at an estimated $680 billion.

Let’s have a quick look at Facebook’s finances 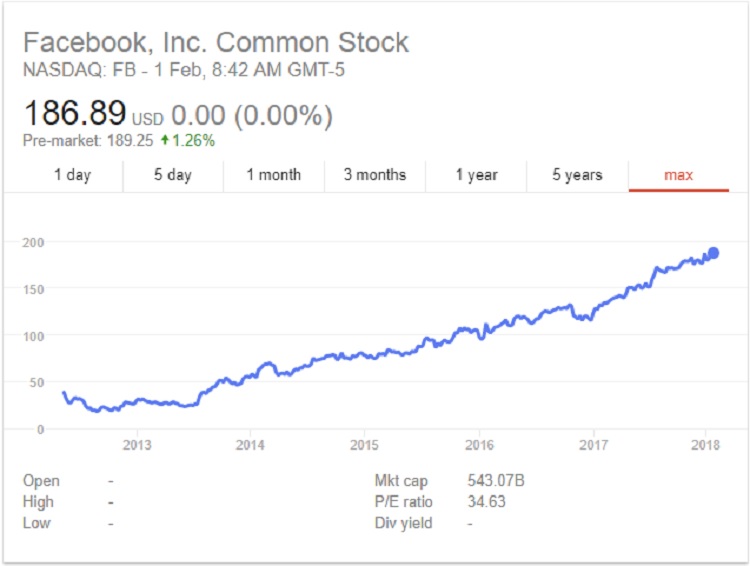 Helping a billion people connect is amazing, humbling and by far the thing I am most proud of in my life.

In a way, he was being honest, but, helping those billion people connect has helped him earn much more for the company than many people know. After all, he has also mentioned before that “building a mission and building a business go hand in hand.”

If we look at Facebook’s revenue streams, there are only two main points listed:

The bulk of that is advertising, which accounts for almost the entirety of the company’s revenue. In fact, advertising revenue for Facebook over the year 2017 was a whopping $39.9 billion.

Thanks to selling ads, since 2012 Facebook has been earning money hand over fist.

Since then it has showed a compound annual growth rate (CAGR) of roughly 59%. Thanks to such healthy growth, the company keeps a strong cash flow and uses that money to buy up competitors from time to time, ultimately driving up its own value.

How it all works together

As mentioned earlier, the basic premise of Facebook is to allow its users to socially share content of their own. This could be anything from photos of their pets or even late-night ramblings of why they think their neighbour is such a stand-up-fellow and should be awarded the Nobel prize. Of course, because Facebook is such a stand-up company, it generously allows people to do this for free.

The problem with ‘free’ is that it often isn’t. Here's the catch; If you can’t identify the product that Facebook is earning from, then either you are the product, the information you generate is the product, or it’s a combination of both.

You see, Facebook doesn’t sell you anything because it is selling you to its advertisers.

Over the final quarter of 2017, Facebook saw an average of 1.4 billion Daily Active Users. As of 31st December 2017, the figure for monthly active users hot 2.13 billion, which was an increase of 14% over the preceding year.

These numbers mean a great deal to Facebook advertisers.

The size of the audience very often determines how much money companies such as Facebook can charge advertisers. There are of course other factors such as the type of advertising, and such, but ultimately it is the user base that is the appeal.

Companies are always on the lookout for ways to expand their potential market. They pay good money to reach out to as wide an audience as possible, in the hopes of selling something to them. Because Facebook has such a huge number of people using it, the potential market to these companies is massive. (If you run a business, you too might be interested in learning how to advertise on Facebook)

Yet if Facebook was not propped up by advertising revenue, it would have to charge the people use uses it. Studies have shown that this amount could be as much as $5 per user, which would result in it losing as much as 90% of its users.

According to a Reuters report, more than 5 million businesses are advertising on Facebook each month. Among them are giant companies, which spend billions in advertising. These are global, recognized brands, such as McDonalds, HSBC, Nestle, and DELL.

Aside from ads, these companies are also paying Facebook to help them increase the popularity and distribution of the posts from their business pages. In fact, they pay for everything from sidebar ads to promoting their posts and even sponsored stories;

As the number of users who are active on Facebook grows, so too does its revenue from advertising. The company has so far run an extremely streamlined operation, but even then, isn’t completely resting on its laurels.

Technology is always changing and even with a hugely successful business model, Facebook is aware that it isn’t impervious to change. Aside from buying up some potential competitors and companies that it feels add value to their core operations, Facebook is also looking at new technologies to future-proof itself.

Oculus Rift – Virtual reality has been touted as the ‘next big thing’ but has so far still not really taken off. However, as prices drop for new equipment, Facebook’s Oculus Rift VR gear is likely to add to its bottom-line. Some projections estimate that Oculus may even make up to 10% of Facebook’s revenue by 2020.

Facebook Watch – Apparently, the company that has thrived on user-generated content is also going into content generation for itself by making its own videos. It also bought the rights to broadcast some sports games and that may drive ad revenue even further.

Going big on mobile – Mobile penetration rate has been booming around the globe and continues to do so. This is also likely to add to Facebook’s advertising appeal to companies around the world.

China – Even as this economic giant is competing globally with its own large tech companies such as Alibaba and Tencent, the appeal of a strong user base in the country has called to Facebook and it has been trying to enter the Chinese market.

If you’re an investor, is Facebook a good buy?

It’s a little late to jump onto the share wagon now that Facebook’s stock price is sky high, but if you can afford it, many analysts believe that there is still much room for the company to grow. Thanks to the company’s strong business model and shrewd strategic calls, it remains an attractive proposition.

Facebook primarily kept a strong focus on their South Asian business, with India being a big thing for them so far. Because of its foothold in this region, it is in a unique position to offer a payments platform that many is the mobile banking and finance areas are now looking towards.

The company remains a leader in the social media space and thanks to its core business, will continue to grow. The wider revenue potential explained earlier will also likely boost its numbers and as of now, it is fairly valued.

Note: This is not a recommendation to buy or sell stocks. Please consult your investment advisor before making any investment decision.

For the average Joe on the street, it can’t come as a big shock that you are what is contributing the most to Facebook’s bottom line. To have it laid out in black and white that you’re in part responsible for Mark Zuckerberg’s billions in wealth might stun you slightly, but in fairness, the company has been offering you a good service at no financial cost.

Yet aside from the time you’ve spent looking at ads (or even worse, looking at a post without knowing it was an ad), there is something else to consider in this free service. Advertising is much more than simply throwing out and hoping for the best.

To assure its clients that they are advertising to the right people, Facebook is making use of the information you have provided it, such as your likes and dislikes, your personal information and your browsing habits. One can’t help but feel that this is just a little bit creepy.

On the other hand, Facebook offers small businesses the opportunity to compete on a global scale, and a scalable means of doing so. This is a real shot in the arm for companies that in the past had absolutely no way in which it could gain widespread recognition quickly.

Technology itself is never good or bad, but it always comes down to how its used. Before you use a free product, think about what you might be offering in exchange for that product or service, even if there is no capital outlay.

Nothing in life is truly free.