ImageRecycle went from a simple idea to handling more than  1,000,000,000 pieces of compressed media, and in a very short time span.

Tristan Hervouvet, co-founder of ImageRecycle and JoomUnited founded ImageRecycle with a couple of partners in 2014/2015. For the image compression service to be utilized to the tune of one billion times is an amazing feat in just around two years.

The idea for ImageRecycle was born out of the business the work he did as a  JoomUnited co-founder. “We developed performance extensions for Joomla and WordPress, so naturally image compression was one of the tools we wanted to implement.”

He shared that basically he and his two partners were chatting about ways to make a website run faster. As web development professionals, they were well aware of the statistics on site speed and bounce rates. Hervouvet shared that website performance is trendy, with all the SEO analysts agreeing that performance has become one of the most important SEO criteria.

Two years ago, Stack Exchange reduced his page weight by 2 with a full content optimization. The crawled pages number stats on Google Webmaster Tools report showed an increase to 100% of the indexed pages. This can be even more effective with online shops. Amazon calculated that a page load slowdown of just one second could cost 1% in sales each year ($1.6 billion).

“CDN and hosting require a lot time and resources and the image compression was something more interesting technically.” The men began testing existing solutions and trying to figure out how to make things simple for the final user.

In the beginning, Hervouvet was more of a site builder specialist (HTML/CSS). “Now, I’m mainly dealing with all the marketing stuff as we have a team of developers,” he shared. 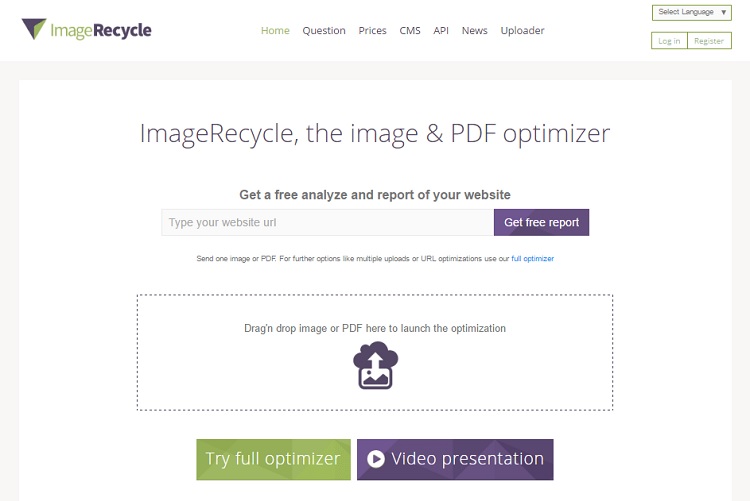 ImageRecycle is so certain of the extreme importance of improving a site's speed that they took the time to do a case study on just how effective faster speeds can be. They point to two main reasons that reducing web page load times works.

First, users simply hate to wait. We live in a busy world and everyone is overwhelmed with tasks, work, a little time with family and friends, and more work. No one wants to wait for a page to load. In fact, the average person will only wait 6-10 seconds for a page to load before bouncing away. This explains why a one-second delay would cost Amazon $1.6 billion lost in revenue.

To test out their theories, the team chose an eBay page to optimize. The page was made up of 5 images and those images came in three different sizes from full size to thumbnails. They used Google Page speed to analyze the page. Before optimization, the page size was 1500KB and after it was 615KB, reducing the size by a little more than half.

The results were startling. Loading time went from 23 seconds to 9 at even the slowest speeds and to 0.2 seconds at highest connection speeds.

Image compression is one of the main performance criteria regarding a first loading of a page and it's even more important on mobiles where connection are usually slower.

Growing The Plugin From 0 to 1 Billion

Hervouvet and his partners knew that there was a great need for a simple image optimization, but they probably didn't imagine that in just a couple of short years they would hit 1 billion images optimized.

However, they did do some things to ensure they were as competitive as possible.

One of the main challenges ImageRecycle has dealt with in regards to growth is increased competition in the marketplace. “When we launched the website, we were the third image optimization like ours on our the market. Now, there are 10 different competitors.”

They initially started by promoting their product directly to bloggers. They also sought out third party plugin developers to resell their optimization services. They also decided to start an affiliate program so that their product is being sold on multiple sites.

We offer a 30% commission on any sale for our affiliates. We also offer a communication kit, a detail of the tracking. You'll get paid once you reach $100. Some of our affiliates are earning more than $500/month.

More than a CMS Plugin

In the beginning, Hervouvet was more of a site builder specialist (HTML/CSS). “Now, I’m mainly dealing with all the marketing stuff as we have a team of developers,” he shared.

One of the keys to ImageRecycle's growth has been looking at what is available for consumers and expanding on it in scalable ways. ImageRecycle is so much more than just a CMS plugin. They have opened their API and work with third party vendors. This means that they have partnered with third party developers to grow even more as they provide more and more tools for website owners on a wide variety of platforms.

Hervouvet and his partners began expanding with their CMS extensions because they already have that ability with their company JoomUnited.

Basically, there are two optimization extensions. One extension is for Joomla and one is for WordPress. “It’s a way to propose a global speedup solution.”

Around 25% of their clients are looking for a WordPress solution, with Joomla, Shopify and Magento make up about 15% each. The remaining 30% use other CMS or a standalone plugin version that you can run on any server without a database. Hervouvet shared that they expect to take as much as an additional 10% of the market share with the Magento plugin.

Standing Out from the Competition

As with most products where there is competition, it is extremely important to consistently come out with updates and new features that the competition simply doesn't offer.

Hervouvet points to some unique features of his software that make it stand out:

The software also uses some specific techniques that reduce the image sizes as much as possible.

“The script on the server makes a full analysis of Colors radius sizes, Textures, Patterns. Once the script detects some elements that can be optimized, it runs the optimization on image zone that are mostly invisible to the human eye. We also eliminate non-standard elements added by some image software such as Photoshop or Gimp. This process is completely lossy and can be reverted.”

For PNG and GIF images optimization, it's quite different, and they use several methods:

Finally, as with most successful business models, image recycle prices themselves competitively. Reviews of ImageRecycle show that the software is above average.

Kasa Reviews gives it a a good review based on the fact that there are some features other image compression plugins don't offer and that you can also compress a PDF file.

On the AppStore, ImageRecycle has four out of five stars. Users state that it saves them time and the free version works well or you can upgrade for full functionality.

When it comes to pricing, image recycle offers more than competitors such as Kraken and Tinypng, but for a lower cost per month.

Hervouvet shared, “We’ve aligned our prices with the lowest price of our competitors, but we have more features with our service and more CMS plugins.” Because of this, they have bigger clients than some of their competitors and are reaching web agencies that are seeking more professional services. Although there are many other plugin out there for image optimization, they focus mainly on WordPress and ImageRecycle is so much more than that.

One of the keys to their growth has been this type of innovation. In fact, they have a Prestashop plugin in development right now.

What You Should Take from ImageRecycle's Success

Notice how the founders were already highly experienced in the business they opened. They'd already started one successful company and the founders had backgrounds in development. The first key is to find a business model you understand well and are passionate about. They then focused on how they could provide something better than the competition and for less money. Finally, they both promoted directly to third party developers and on social media while also keeping new products in the development pipeline.

WHSR would like to thank Tristan Hervouvet and the ImageRecycle team for letting us pick his brain about how the team grew this company from 0 to 1 billion compressed images in such a short span of time.