Winning in business requires a very specific set of skills that entrepreneurs can learn and develop over time.

However, figuring out the ins and outs of running a business, whether online or off, can be expensive and frustrating.

Fortunately, we had an opportunity to talk to business coach and former fighter pilot Chuck Gumbert (http://chuckgumbert.com) about his techniques that help businesses win.

Chuck Gumbert is a former military fighter pilot. To be in that position requires discipline, focus, and savvy. He has taken the techniques the military taught him so he could be a successful fighter pilot and parlayed them into tips to run a thriving business.

Chuck agreed to chat with WHSR about how businesses can change their thinking to that of a fighter pilot and overcome various obstacles standing in the way of success.

Chuck Gumbert is a former F-14 Tomcat pilot. Chuck is no stranger to adversity, yet he's overcome everything life threw at him and excelled. When he was two years old, he contracted polio, which can be a crippling disease. However, he was able to eventually overcome the effects and go on to participate in high school sports. Eventually, he became a fighter pilot in the United States Navy, even managing to graduate at the top of his class.

Over the years, Chuck has set goals and accomplished them, such as climbing Mt. Kilimanjaro. Mt. Kilimanjaro is located in Tanzania, Africa and is the highest mountain on the continent. It 16,100 feet from base to top. The climb can take between five and nine days, as climbers must pick the best route and pause to let themselves adapt to the altitude changes.

I asked Chuck what drew him toward becoming a fighter pilot.

I have always had a love for flying. There were some military jets that flew low over the house when I was 5 or 6 and that got me hooked. My goal was to fly for the airlines, but halfway through college it was obvious that I was not going to have the hours necessary to fly for the airlines. So I joined the Navy to build up those flight hours.

How the Military Trains You for Life

Much of Chuck's early career paved the way for his success later in life and his ability to help others learn how to succeed. Being a fighter pilot isn't easy. Pilots must develop a strong mindset to get through tough times. One of the hardest things Chuck faced as a fighter pilot was simply being away from home for extended periods of time.

Being away from home for months at a time was tough. Another was landing aboard the carrier at night. It’s scary as all-get-out, but through practice and a positive mental attitude, I mastered it.

The military serves as a strong training ground for running a business. Chuck shared, “It helps you understand the importance and need for a plan. And I’m not talking just in general, but in life as well. I’ve met quite a few people that have gone through a portion of their life and have no idea how they got to where they are or where they are headed.”

Chuck's book, Pushing the Envelope highlights the issue of people not knowing how they got where they are or where they are headed next. In his introduction for the book, Chuck shares:

As a former F-14 Tomcat pilot, I will share with you what I have learned along every stage of that journey. The lessons are many, but the foundation is the same. You will only get as much out, as you put in. 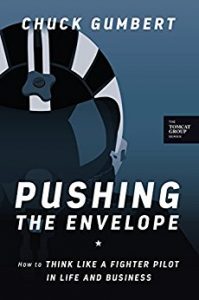 As Chuck mentioned before, one of the biggest mistakes business owners make is not having a plan for their growth and how they'll move forward.

“[Sometimes, business owners] do not have a plan for their business. They don’t know where they are going or why. Their business is running them instead of the other way around.”

In his book Pushing the Envelope, Chuck goes into detail about how business owners can take control of their business path or trajectory, figure out where they want to take it, and then develop and later implement a plan to get there.

Here is a short excerpt from the book:

What if your true capacity is far beyond your current lifestyle? Why would I ask that? Because that is how the majority of us live. We play it safe by thinking we are incapable of pushing harder, faster, and higher than we are right now. For instance, how many hours per week do you spend watching TV? How much time do you waste on social media or mindlessly clicking around on the Internet? How much fast food do you binge on? As I said, your true capacity is far beyond the way you are living; but this isn’t condemning, it's exciting.

Chuck goes on to explain ways to maximize accountability and become more and more efficient in business and in life.

In order to truly succeed in business (and life), you have to change your way of thinking. Consider the way the military trains its soldiers. They are thrown into a new routine through basic training and pushed to their very limits physically, emotionally, and mentally. Learning to fight your way through business is a similar landscape.

What If I'm Failing? 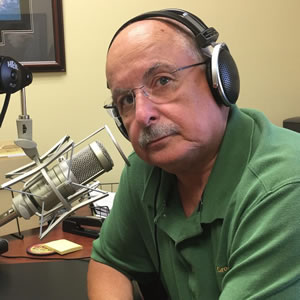 Perhaps your business is failing or not growing. You may hear this inner voice that tells you that you'll never win. You must first learn to overcome that negativity if you want to succeed.

“Don’t give up. Like GS Patton said, ‘Courage is fear holding on one moment longer.' Find a coach or successful mentor and work with him/her to help get things lined up. I always have my clients focus on only 1-2 things that will make a significant improvement,” added Chuck.

Around 20% of businesses fail in year one and 50% by the fifth year. By the time year 10 hits, the failure rates are as high as 80-90%. Those statistics might seem daunting, but Chuck truly believes the main reason for these failures all goes back to lack of planning.

Again, it’s the need for a plan. And that plan begins with a strong vision for the future and a strategy as to how to get there.

For example, for his own consulting business, Chuck has a 1 year, 3 year, and 5 year plan. He updates these plans twice a year. He also tracks his progress toward those plans and makes tactical adjustments along the way.

Don't Be Afraid to Delegate

I asked chuck for an example of a business he helped and what was done to turn things around. He pointed to an area that a lot of small business owners struggle with – delegation. It is pretty difficult to grow a business from the ground up and then turn some of the operation over to another person. No one does the work quite the same way that you would.

However, delegation is one of the keys to taking your business from small to mid-size or larger. Chuck shares this story about a business owner who consulted with him and was struggling with this exact problem (name of business redacted for privacy).

He wanted to do it all himself, because he felt no one could do it better than he could, and it was holding back his ability to grow. He came to a crossroads, it was time to either let go and trust his people, or stay stuck at his current annual revenue number. He chose option 1 and his business has almost doubled.

Whatever the issue, we hope that this advice from business coach Chuck Gumbert has given you some insight and some steps to move forward. WHSR would like to take a minute to think Mr. Gumbert for sharing his invaluable insight into how to run your business like a fighter pilot.

Chatting with Chuck Gumbert was eye opening. I personally have a real tendency to sell myself short and play up my strengths enough. I learned: